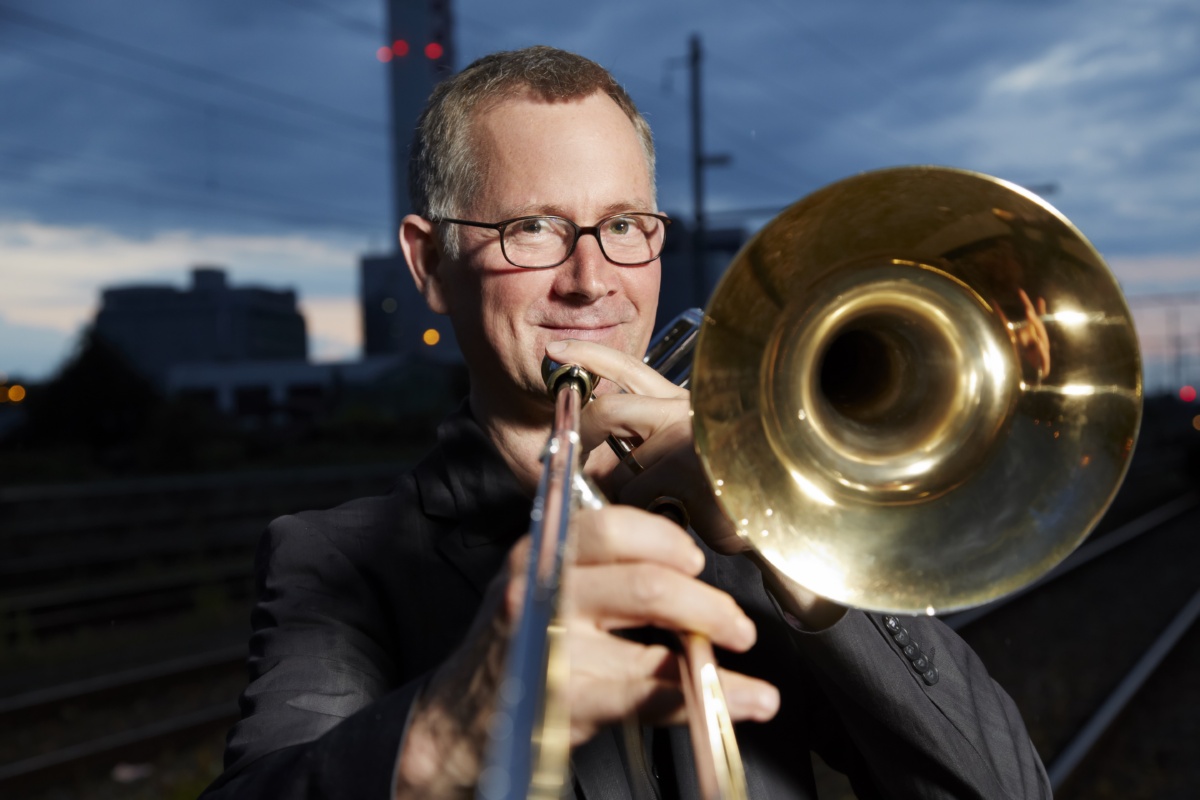 As the trombone began to sing... And the trombone certainly did sing, due to the tremendous artistry of the soloist Mike Svoboda (playing from memory!), whose heavenly smooth tone, combined with an unsurpassed dynamic and timbral flexibility, was stunning. (Schwetzinger Zeitung)

In his triple role as trombonist, composer, and educator, Mike Svoboda is among the most original musical personalities of our time. His work is always geared toward connecting with listeners and bridging the gap between the stage and audience, without betraying the music with gimmicks. He is consistently expanding his instrument’s repertoire and has premiered over 400 works to date. These include numerous trombone concertos, which he has performed with orchestras including the WDR Symphony Orchestra, Bochumer Symphoniker, SWR Symphony Orchestra, Bavarian Radio Symphony Orchestra, Stuttgart Radio Symphony Orchestra, BBC Scottish Symphony Orchestra, Bruckner Orchester Linz, and the Sinfonieorchester Basel, under conductors such as Stefan Asbury, Peter Rundel, Jonathan Nott, Ilan Volkov, and Dennis Russell Davies.

The list of composers with whom Mike Svoboda has worked over the last thirty years gives a sense of the diversity of works he has premiered: it includes, among others, Georg Friedrich Haas, Heinz Holliger, Christian Jost, David Lang, Benedict Mason, Martin Smolka, Mattias Spahlinger, and Frank Zappa. In particular, he has given the world premieres of Wolfgang Rihm’s Canzona per sonare for alto trombone and two orchestral groups, Voyage III by Toshio Hosokawa, the music theatre work As I Crossed a Bridge of Dreams by Peter Eötvös, and NUN for flute, trombone, and orchestra by Helmut Lachenmann, as well as the German premieres of Michael Nyman’s trombone concerto and that of Iannis Xenakis, Troorkh.

In recent seasons, Mike Svoboda made his debut at the Elbphilharmonie as part of the Hamburg Musikfest with the world premiere of Beat Furrer’s Spazio Immergente III for soprano, trombone, and ensemble by Beat Furrer. He also performed Pascal Dusapin’s trombone concerto WATT at Milano Musica with the Orchestra Filarmonica della Scala. Following the world premiere of Georg Friedrich Haas’ Trombone Concerto at the Donaueschingen Festival 2016, he performed the work with the Vienna Radio Symphony Orchestra, the Deutsches Symphonie-Orchester Berlin, and the Basel Sinfonieorchester. In 2017 he was critically praised for his German premiere performance of Kurt Schwertsik’s Mixed Feelings (Gemischte Gefühle) with the Staatsorchester Stuttgart under the direction of Dennis Russell Davis.

Born on the western Pacific island of Guam in 1960, Mike Svoboda grew up in Chicago and studied composition and conducting at the University of Illinois. One of his early teachers was Ben Johnston, who extended Harry Partch's experiments in just intonation tuning. In 1982 he won the BMI Young Composers Award and used the money to relocate to Europe. His time spent as trombonist and assistant with Karlheinz Stockhausen from 1984 to 1996 proved to be of tremendous importance to Mike Svoboda’s musical development.

Mike Svoboda has repeatedly been recognised for his creative work, including with the Schneider-Schott-Musikpreis Mainz (2000), The German Record Critics' Award (2005), and the Praetorius Musikpreis Niedersachsen in the category “Music Innovation” (2008). Numerous CDs, mainly for the WERGO label, document his art both as a performer and composer. In 2005 he founded the Mike Svoboda Ensemble with music colleagues from around the world. He has been professor for trombone and contemporary chamber music at the Hochschule für Musik Basel since 2007.

Trombone and chamber orchestra or ensemble

The sheer unending length of the soloist’s glissandi was impressive, over which the orchestra blossomed in many colours.

When the trombone skips and dances from the highest register down into the depths and back up again at an astonishing tempo; when it chatters and sings, whispers and screams defiantly; in short, when the trombone is played with such nuance, it speaks as if human. Then Mike Svoboda plays it, a brilliant musician.

(…) Mike Svoboda is not only a composer, but a God amongst trombone players who seems to have flawless technique.

The American trombonist Mike Svoboda, a Swiss resident, explored the sound possibilities of his instrument with virtuosity and unbelievable technical mastery – and, made it look easy.

As the trombone began to sing… And the trombone certainly did sing due to the tremendous artistry of the soloist Mike Svoboda (playing from memory!), whose heavenly smooth tone combined with an unsurpassed dynamic and timbral flexibility was amazing. (…)

A lively masquerade between Wagner, new music, jazz, rock, and pop with brief texts „for, against, and by Wagner" that emerges from the brilliantly crafted and enthusiastically experimental “14 Attempts to love Richard Wagner” by the American trombonist and composer Mike Svoboda. The collage, which presents itself as “Adult Entertainment” imparted congenially by Svoboda's quartet without any stylistic blinders.

After this concert everybody who considers contemporary music to be sterile and inaccessible is refuted. Mike Svoboda has the rare gift to present complicated music with exactly the right twist of irony making it what Mozart's piano concertos once were: excellent entertainment, wholesome for belly and intellect that lets the audience laugh as well as think. There ought to be more serious concerts with that much humour!

…a musical clown and high-performance instrumentalist… 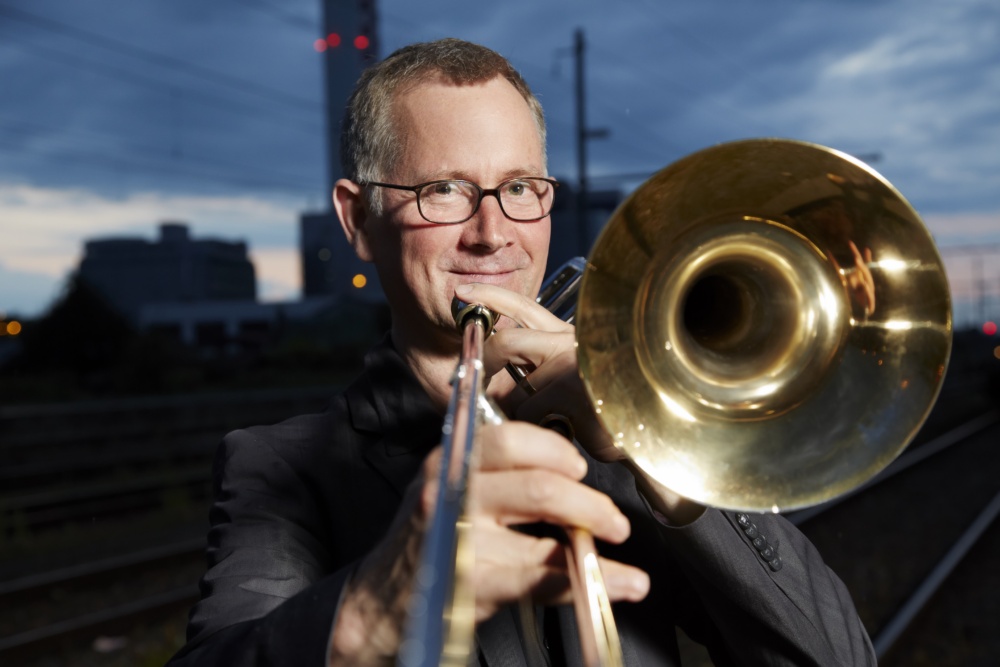 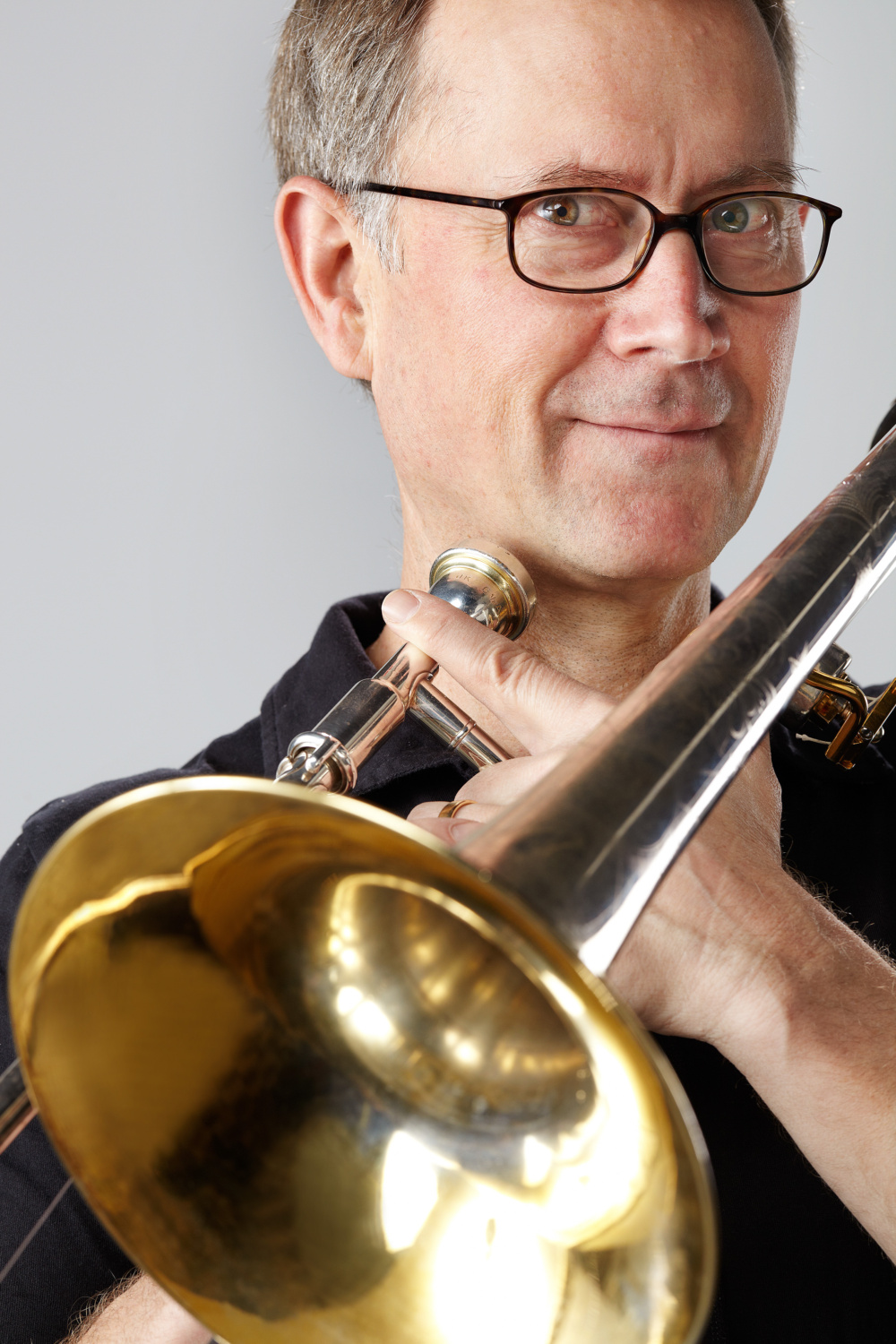 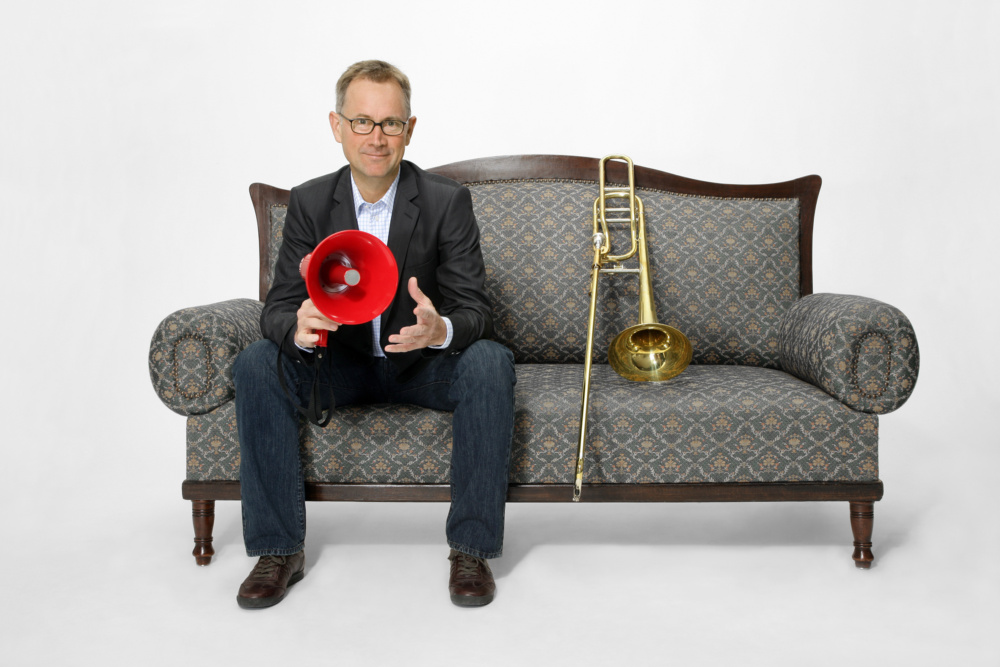 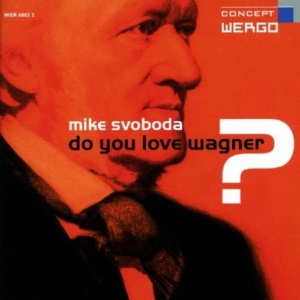 Do you love Wagner 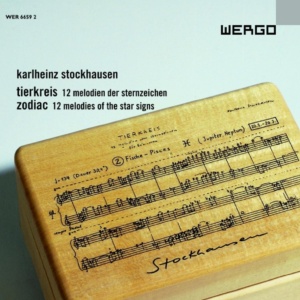 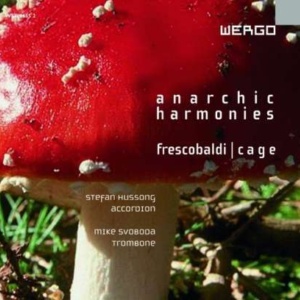