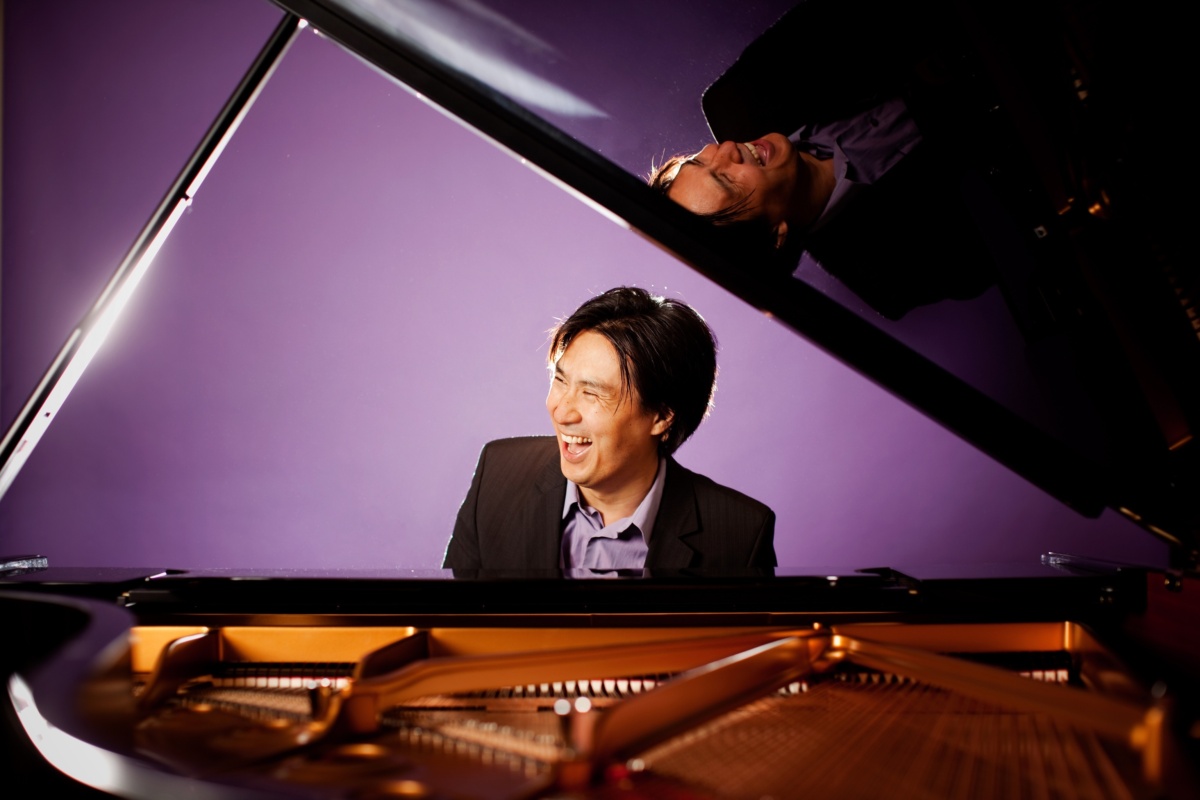 Hyung-ki Joo, You Just Have to Laugh

Hyung-ki Joo, Rachmaninov by Himself

Johannes Brahms, Piano trio No. 1 in B major op.8

A smart, dashing performer with an industry buzz created as much by his charismatic presence as by his work at the keyboard. […] The full house gave Joo enthusiastic applause after each spoken introduction and did the same with a mighty shout after each piece. Billboard

Hyung-ki Joo has devoted his creative energy to making classical music accessible for audiences of all ages and backgrounds and has explored ways to present concerts in fresh and relevant ways for this 21st Century.

On stage, Hyung-ki Joo enraptures audiences with his jovial and contagious stage presence as well as his high-energy, virtuosic performance. He takes on various musical roles and develops special projects that present him as pianist, orchestra leader, communicator, arranger and composer. As a soloist, he has performed with renowned orchestras such as the London Philharmonic Orchestra, the Seoul Philharmonic Orchestra, the Wiener Symphoniker, and the Royal Philharmonic Orchestra. An invitation from the Orchestra dell’Accademia Nazionale di Santi Cecilia under Sakari Oramo is a high point of the current season. As a curator, he is invited to conceive the opening of the Wiener Festwochen 2023.

His love for chamber music has shaped Hyung-ki Joo’s musical career, leading to collaborations with artists including Renaud Capucon, Martin Fröst, Janine Jansen, Mischa Maisky, Julian Rachlin, Belcea Quartet as well as members of the Alban Berg Quartet and the Quatuor Ébène. Since 2021, a new trio project has been formed with members of the Quatuor Ébène, Pierre Colombet and Raphaël Merlin. His fondness for lied and vocal repertoire has led to collaborations with singers such as Dame Felicity Lott, Valentina Nafornita, Julien Prégardien, and future projects include collaborations with Mojca Erdmann, Asmik Grigorian, Nadine Sierra.

Besides performing as a pianist and chamber musician with the world’s top orchestras and musicians, Hyung-ki Joo has also collaborated with many artists outside of the conventional classical music world. Billy Joel is one such artist who engaged Joo to arrange and record Joel’s final album of solo piano pieces - Fantasies and Delusions. He has also appeared in several films, including Pianomania, Noseland and Everything You Always Wanted to Know About Classical Music.

A passionate communicator, Hyung-ki Joo works to inspire the next generation of musicians. In his Beyond the Practice Room workshops, he places the focus on the joy of making music and encourages participants to explore other directions beyond “classical” performance. He loves to work regularly with students, youth orchestras and ensembles. Following a recent collaboration with the Norwegian National Youth Orchestra, he will coach and perform with the Luxembourg Youth Philharmonic Orchestra later this season. He is the recipient of an honorary doctorate degree from Manhattan School of Music, serves on the faculty of the Paderewski Academy, and is a mentor for graduates and students in their last year at the Yehudi Menuhin School.

With his duo, IGUDESMAN & JOO, they ignited the internet with their inventive and hilarious videos combining classical music, comedy and pop culture, and have brought laughter into concert halls all over the world. Major orchestras have commissioned the duo to create new works, and illustrious musical guests such as Joshua Bell, Gidon Kremer, Viktoria Mullova, Yuja Wang, have all asked them to create shows for them. They have worked with actors such as John Malkovich, and Sir Roger Moore (in several projects for UNICEF), and are authors of the book, Rette die Welt (Save the World), published by “edition-a”.

Focusing on the humour and moments of surprise inherent in Haydn‘s music.
Works by Haydn, Ravel, Prokofiev, Hyung-ki Joo, and others

Conceived and conducted by Hyung-ki Joo.

'Keys Ringing and Strings Attached' for piano and strings (play-conduct)

In 'Jazzical', Hyung-ki Joo and Andrei Pushkarev present jazz-inspired classical works, jazz rooted in classical music, as well as a wild mix of both genres.

Works by Schumann, Strauss, and a new song cycle by Hyung-ki Joo.

„As charming and affable was the pianist’s introduction, so entertaining and likeable his continuation (...) After this remarkable concert, the audience immediately rose to give a standing ovation.“

"This is not to say that pianist Hyung-ki Joo merely provided cues and "accompaniment", quite the opposite! Not least in Maurice Ravel's only Piano Trio in A minor from 1914, the Korean was often primus inter pares."

“A smart, dashing performer with an industry buzz created as much by his charismatic presence as by his work at the keyboard. […] The full house gave Joo enthusiastic applause after each spoken introduction and did the same with a mighty shout after each piece”

”Sensitivity and virtuosity with aplomb”

“Hyung-ki Joo is the perfect chamber-music pianist, one who is perfectly balanced with his colleagues and who has an imaginative response to the music he plays without drawing attention to himself”

“A most engaging human being of great talent” Rachmaninov Prelude in D op.23 no.4 performed by Hyung-ki Joo

All the music published by Universal Edition here